Kanza looked up, towards Mecca.

The erratic orbit of Settlement U2649 made it hard to chart the qibla for daily salat, but she’d managed to hack together a module which projected a translucent overlay over the bare steel walls of her habitation pod. It was thoroughly illegal, but her duties in the Settlement didn’t allow her the luxury of travelling to the Omnifaith gatherings in the Recreation District. After the twelve hours of her Toil, and the commute to and from whichever District she was assigned to for the day, Kanza had barely enough time to eat and sleep. Anyway, she was sure the Prophet (Peace be upon him) would have praised her ingenuity.

Her prayers complete, Kanza steeled herself for the day’s Toil. As a relayer, it was her job to transport deliveries throughout one of the surrounding districts. Orders would come in from Central, the Artificial General Intelligence which managed the day-to-day running of the Settlement. She and the rest of the small army of relayers would then lug the identical metal cannisters to their destination, the only reward being a handful of credits, a log in Central’s database and a new metal canister to strap to her back.

The official line was that only humans could withstand the heat and radiation which bombarded the open spaces of the Settlement, even through the protection of its silicate dome. Kanza had a different theory: she was simply more expendable than a drone.

Relayers never found out what they were transporting: tampering with a delivery, like almost any other offence in the settlement, was punishable by eviction.

Still, with efficient route planning, it was possible to complete the Toil with no worse effects than fatigue and a sallow complexion. The most important thing was to finish the day’s route as close to the start as possible: Central only paid out credits for the time you were relaying. After that, you were off the clock.

The console mounted above her rusted washbasin let out a series of shrill beeps. The day’s deliveries were in. Kanza swiped open the order docket and let out a groan: The Ummah District. One of the furthest of the safe districts from he pod, and always rammed with people. She’d be lucky to get back before Isha prayers.

A distortion on her console caught her eye — a tiny iridescent glow in the corner of the display, almost as if it was behind the screen. Prodding at it, the colours warped and grew beneath her calloused fingers. A pattern of squares?

Suddenly a message appeared, faint beneath the readouts detailing ambient conditions in her tiny pod. If she squinted, she could probably make it out. She could definitely see her name, followed by “DO NOT DELIVER…” Further down she could see “…GENEROUS REWARD.”

She could feel the intrigue welling up inside her, but she tamped it down. All kinds of shady things went on in the Settlement, everyone knew that. But that wasn’t how you got out. You did your job well, didn’t complain and maybe Central in its algorithmic wisdom would promote you to an easier route.

She flicked off the console and scurried out of the pod, vowing to concentrate only on the Toil ahead of her.

But at the back of her mind, the squares and message danced… 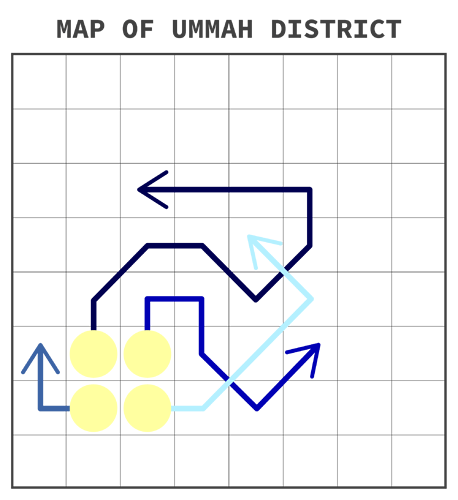 What route should Kanza take? When you know, submit your answer here: Week 3 Submission Thread (Puzzle #4)

Plot the most efficient relay route for your day’s Toil.

Assign an increasing ID# to each relay point in your route as you go (1-64).

Each numbered relay point must be adjacent to the previous one, including diagonally.

For security reasons, you must leave the district from the same point you entered. The extra distance from your final relay to this point is the responsibility of the Relayer and will not be compensated.

For verification, upload your final route to Central Control for processing. 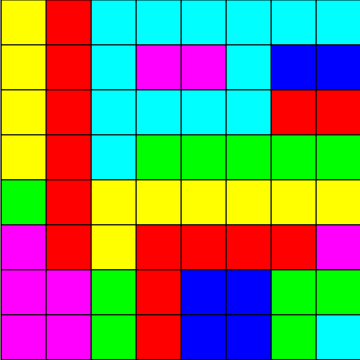