This puzzle can also be found on Medium. 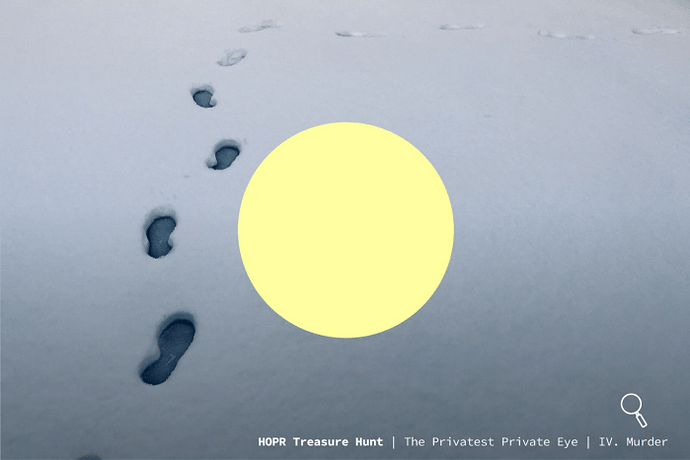 If Herringford was rattled by Myra Adonitis’ doom-laden warning, he didn’t show it. But the meal quickly ended, and Herringford returned to its study. It was clear the party was over. Besides, it had already started to snow.

Most of the guests headed to their homes, but some were staying at the Hall. With no official invite, and still no sign of Sybil. I made myself scarce in one of the many dusty attic rooms, waiting for the staff to head to bed.

It must have been around 3 a.m. when I finally emerged. The house was silent as the grave and twice as cold. My trusty Delta Electric flashlight in hand, I crept down the servants’ stairs, my heart pounding with every creak of the ancient floorboards.

Once on the ground floor, I planned to make a beeline for Herringford’s study, but a light from a side room caught me short. Straining, I thought I could make out a voice and metallic clicking. Holding my flashlight like a baton, I crept towards the sliver of light.

But before I could get close enough, an almighty creak echoed through the silence. The jig was up. Time for plan B.

I burst through the door, but the commotion had clearly scared the occupant away. The window was open and the room was abandoned. I poked my head out, but whoever I’d disturbed had already disappeared along the path and around the other side of the Hall. I shut and locked the window — at least the interloper would be trapped outside.

On a shabby desk I found the explanation for the noise: a portable radio transmitter hooked up to a keyer device for tapping out Morse code. Next to that sat a small wooden box containing a strange contraption: a sleek black portable typewriter adorned with cogs. I tentatively pressed a few keys. Lights lit up, but not for the letters I’d pressed.

An open notebook sat beside it, the top page hastily torn off. But it was quick work with a pencil to reveal what had been written via the indentations on the page beneath:

Whatever it meant, it was beyond me. I put the message in my pocket and continued my hunt.

It was a matter of seconds to jimmy the lock on Herringford’s study. I flicked my torch around the room, revealing an Aladdin’s cave of artifacts and old books.

Above the marble mantlepiece hung an enormous portrait of Herringford himself. The artist had done his best, but there was no concealing what an ugly piece of work his Lordship was.

I got to work and quickly found what I was looking for: a glass-fronted case emblazoned with a small brass plaque which read “Partial map fragment belonging to the Privateer K. c1685.” To my dismay the case was locked, but empty.

Stolen? If it was the thief had the key. There were no marks around the lock. And why lock the case afterwards? No, more likely Herringford was paranoid, especially after his argument with Professor Kiel.

But you can read guys like Herringford like an open book. I tiptoed up to the portrait, feeling round the edges. Swinging it to one side, I found a hidden safe.

Ancient door locks were one thing, but this safe was the real deal. Bespoke-made, inches of solid steel. Short of a few hours with a stethoscope, the only way through was with the combination.

There was no dial: instead a series of nine chambers labeled with letters blocked my way.

I tried a few guesses, but it was obviously futile. Another damn code I’d have to leave uncracked.

I was yanked out of my reverie by the sound of the grandfather clock in the main hall. 4 a.m. I’d need to get back upstairs sharp before the staff began to prepare for the day. And I needed some sleep.

A flash of movement outside drew my attention. Peering through the gloom, I saw the unmistakable shadow of someone moving. Was this the person who’d operated the mysterious machine? Sleep be damned, I needed answers.

Bracing myself against the cold, I hauled open the window and headed out into the snow.

It didn’t take me long to find what I was looking for: a single set of footprints, heading from the back of the house, away from the study, off into the moonlit grounds. The footprints were curious: deep and close together, flanked by two lines of circular impressions.

Rounding a line of trees, my blood froze. The enormous body of Hubert Herringford lay face down in the snow. His crutches lay beside him, and his arm was outstretched. Had he followed the intruder and collapsed?

But I knew that was just wishful thinking. Reaching the body, I saw the awful truth: a knife protruded from his back, and his coat was soaked with blood.

He wasn’t long dead, but there was still nothing I could do for him. Even through the layers of fat, the blade had pierced Herringord’s heart. Following his outstretched hand, I saw the outline of two letters: R K.

A light flicked on at the top of the house. A woman appeared in silhouette, taut and elegant. Sybil.

I turned to run, and that’s when it struck me. Looking around, I saw the impossible. Other than Herringford’s footprints, and mine, there wasn’t a single other track in the snow.

So how had someone stabbed Herringford in the back?

The mystery of the murder will continue throughout the story. For now, concentrate on the safe. What is the nine-letter password? When you know, head to the forum to give your answer.