This is the solution to Puzzle #2, which was part of the week 2 Challenge. Congratulations to @Murmeel who solved it first. These solutions will walk through the general approach, but will not give a complete step by step walkthrough to preserve some of the secrets of the treasure hunt.

We’re asked to find the stately home that exists in the map square north of the one shown: 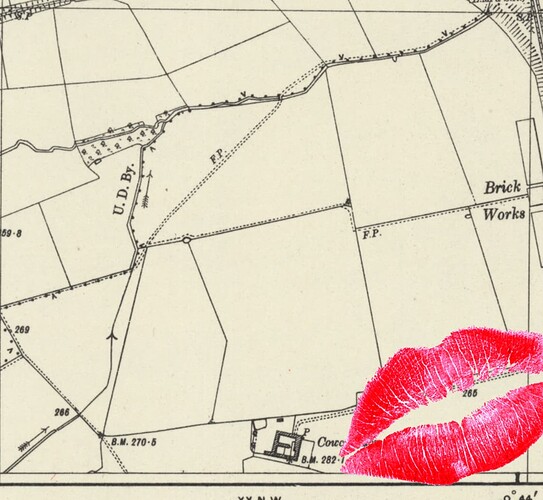 Unfortunately the map is bereft of clues, and the one useful place name has been obscured by the mystery woman’s lipstick.

Where are we? When are we?

As with Puzzle #1, it’s important to orient ourselves in time. Krieger says: “It’s 1938. No-one shocked by anything anymore.” The story also suggests that Krieger is currently in the US (various context clues) but will have to travel by steamer to reach his destination, which suggests a European solution.

There are a few ways to solve this, but the simplest is probably to look at the markings at the very bottom of the image. Although they’ve been cut in half, it’s not too hard to deduce that they say XX N.W. and 0°44’, a longitude marker.

That’s the map off the bottom of the one in the story. Looking at the top of that map shows we need to go to this one: View map: Buckinghamshire XV.SW (includes: Bletchley.) - Ordnance Survey Six-inch England and Wales, 1842-1952

It’s easy to locate the map square from the story. To the north, we see a much more densely populated square. We’re looking for a stately home, and Bletchley Park fits the bill.

To further confirm this answer, Bletchley Park was indeed sold in 1938, before being acquired for by the UK government once WWII broke out.