⬡⬢⬡⬢⬡⬢⬡⬢⬡⬢⬡⬢⬡⬢⬡⬢⬡⬢⬡⬢⬡⬢⬡⬢⬡⬢⬡⬢⬡⬢⬡⬢
Renowned Symbologist Gordon Blanter was walking back to his office from his morning swim, enjoying the crisp October air. The campus was always quiet at this time of the morning. Blanter used this time to think over his research. He was so lost in his train of thought that he didn’t notice the helicopter until it was almost on top of him.

The rotors stopped, and out climbed three men in a dark-black suits. The tallest of them step forward and shook Blanter’s hand.

“Gordon, please. Although I can’t imagine what the Bureau could want with me at seven in the morning.”

“We’ve been intercepting a lot of internet chatter. Something’s coming – something big. And then yesterday…”

“I’m sorry to waste your time, but cyberterrorism isn’t really my area. There are no ritualistic murders and barely even any anagrams. You need a… cryptographer,” Blanter muttered the last word with no small amount of disgust. “MIT is that way.”

Agent Johnson at least had the decency to look sheepish.

“We tried, but they’re all too busy trading NFTs. Even Uncle Sam can’t afford their day rates now.”

They were in Blanter’s office now, and the conversation segued naturally despite several minutes having passed. That sort of thing always seemed to happen to Blanter, but he ignored it.

“I really don’t think I can be of any help, agent. My adventuring days are behind me. I stick to Symbology now”

“Please, sir, just hear me out. We wouldn’t be bothering you if we weren’t at our wits’ end. You’ve really helped us out of some jams.”

Now it was Blanter’s turn to look sheepish.

“I may have done some small services for your employers in the past.”

“Don’t be so modest, sir. You stopped the destruction of the Vatican, after only three horrific murders.”

“Six. But I’m told they had Cardinals to spare.”

“And who can forget the time you stopped that sinister cult of albino dwarves using only the power of words?”

“Some of my finest work! Although I’m told it just turned I’d crashed the Maine Under-9s Spelling Bee. But you had something to show me?”

Johnson reached into his briefcase and removed a fragile sheet of paper, obviously several hundreds of years old. Blanter’s eyes grew wide. He’d seen it many times before.

“I thought you said this was about Internet chatter.”

“Until yesterday it was. Then this was… delivered… to the President. He found it on the Resolute Desk last night. You recognise the manuscript?”

“Of course I know it. It’s from the Herringford collection. One of the great symbolological mysteries of our time. But I don’t see what…”

“You wouldn’t. See anything, I mean. But look!”

With a deft flick of his wrist, Johnson produced a torch and shone it on the paper. New words appeared on top of the old ones:

Blanter grabbed the message and began scrutinizing it carefully. Before even a minute had passed, his eyes lit up: “You did the right thing coming here. I know where the attack will take place, and in less than a day!”

Agent Johnson looked stunned. “But that’s incredible! We’ve had our best agents on it for almost twelve hours, and they couldn’t find anything.”

“Ah but they don’t have the keen insights of the Symbololologist.” Blanter took a globe from his desk and started to spin it back and forth.

“It’s quite simple. The message was stolen from the Herringford collection, which is here. It then travelled to the President’s desk — here. We simply have to travel that same distance due south and we end up…”

Blanter strode over to a bookshelf and removed an atlas. Quickly riffling through the pages, he brought a decisive index finger down in a large city by the coast.

“Not just any church. The start of one of the world’s most important religious processions.”

“Because it says to go in a NEW direction. N, E and W can all represent compass points. The only one missing is… south.”

“That… doesn’t seem like a very precise clue. And is that really the right distance? By my reckoning it’s almost 250km too far.”

“Symbolololology isn’t a science, agent. The message is clear. Here’s where we need to go.”

“But what about that sinister hexagon? I thought as a Symbolologist you would…”

“Merely decoration! Now come on, there’s less than 24 hours until the procession begins.”

Before Agent Johnson could protest any further, Blanter had sped out of his office, the glint of adventure in his eye.

Where does Blanter think the attack will happen? 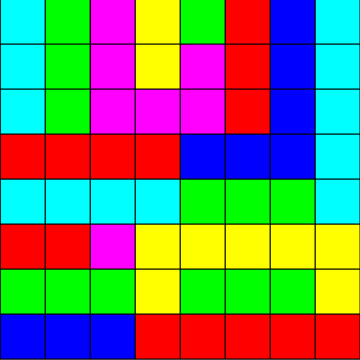