Congratulations to user t0b who correctly submitted the answer SWEDEN and won 1,000 HOPR tokens. But how on earth is that the answer?

First, with any puzzle like this it’s important to read the preamble carefully, even if it seems like filler. The stuff about different Easter dates suggests we’re maybe going to need to think about the Julian / Gregorian calendars, or maybe even even the moon (again). We also need to be on the look out for repeated strings of letters to find the decryption method for the last step. It’s hard to hide these things seamlessly, so places where the text seems unnatural are a good place to start.

But that can come later. First, we need to identify the films in the .gifs and the years they were released. A reverse image search would help, but they’re all quite famous. (It turns out there are many lists of “egg scenes in films” out there, too, which all feature these. The Internet is weird.)

In order, they are:

Now to answer the questions.

In the song Gaston from Beauty and the Beast, Gaston sings (see link above for the section):

When I was a lad, I ate four dozen eggs
Ev’ry morning to help me get large.
And now that I’m grown, I eat five dozen eggs
So I’m roughly the size of a barge!

F is 3 and G is 7 (there have been eight films, so seven sequels. A ninth film, Creed III is in production but not yet released.)

With those worked out, we can now get started on the sudoku. F and G can go in the grid right away. But what next?

A good place to start is to work out the prime factors of the numbers we need the regions to multiply to.

Of course these won’t be the exact numbers in the regions. Any 2 x 2 could be replaced by a 4, for example. But every time we combine two prime factors into a bigger number, we’re using one less digit overall. But we can balance this by adding 1s to a region, as multiplying by 1 won’t changing the total.

We also need to remember that any region that’s entirely within one row, column or box must contain different digits (the four-cell C region in column 8, for example, which needs to be 1 x 2 x 3 x 8 or 1 x 2 x 4 x 6). Also any time there are repeat digits in a region, they must be in different rows, columns AND boxes. That’s quite a big constraint. 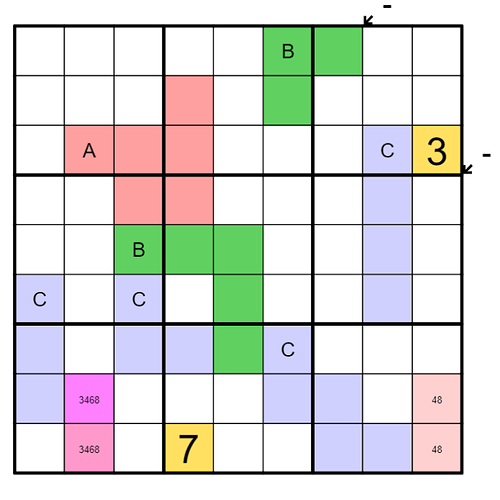 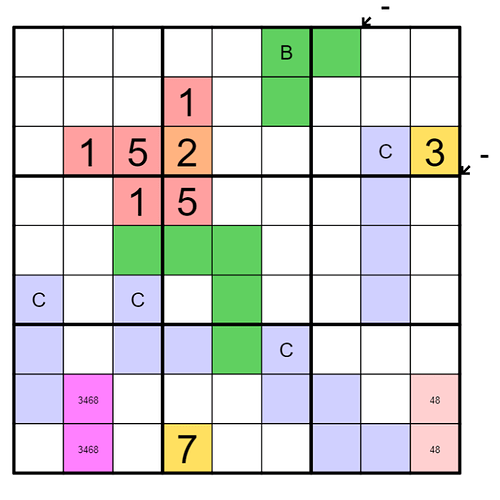 What next? The other numbers have a lot more possibilities, but with Region A filled, we can see that the 60 region below it can have at most one 1 in it. But 60 only has four prime factors. So it must be 1 x 2 x 2 x 3 x 5. There’s only one way to arrange these that doesn’t clash with Region A: 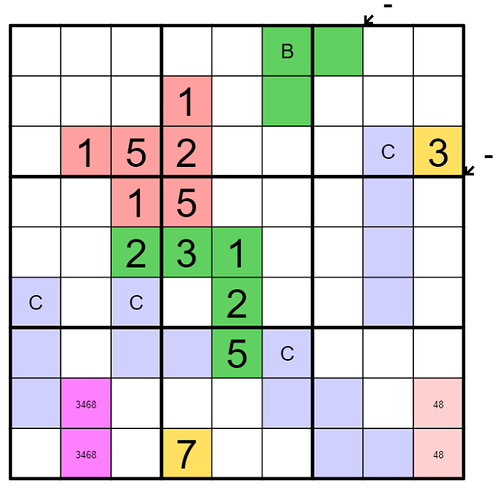 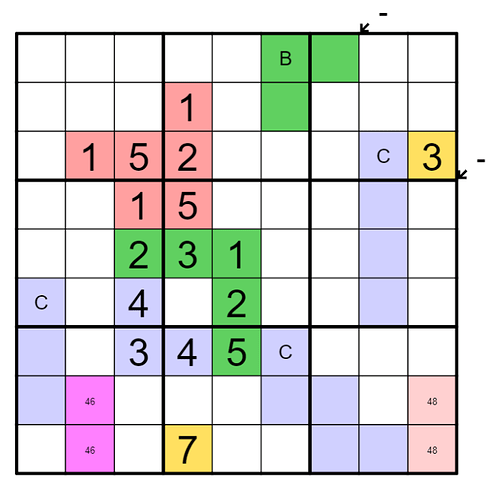 Already we’re running out of places to put the 1984 string we’re told is in the grid, running horizontally from left to right. Each column has exactly one 1, and 1984 is four digits long, so the 1 in 1984 must be in Columns 1-6 or it won’t fit.

From top to bottom:

Therefore the 1984 is in Row 5. Since we already have the 1, we can place the rest of the digits: 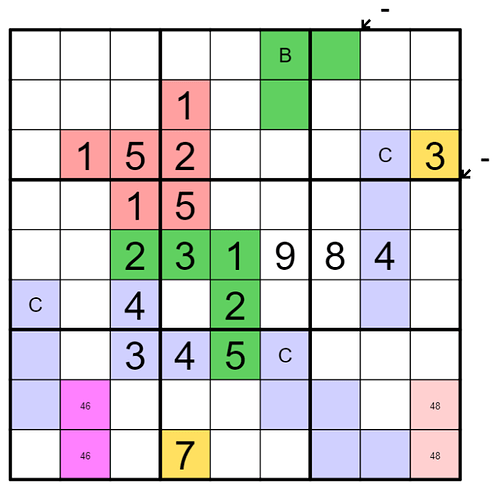 The four-cell C region in column 8 now has a 4 and is all different digits (because it’s all in one column). Therefore it’s 1 x 2 x 4 x 6, and we can place all four thanks to sudoku rules. 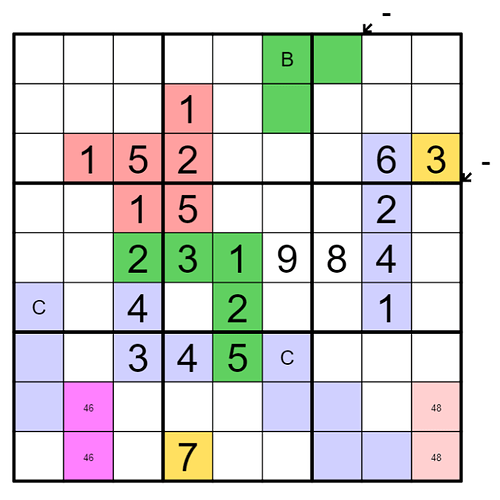 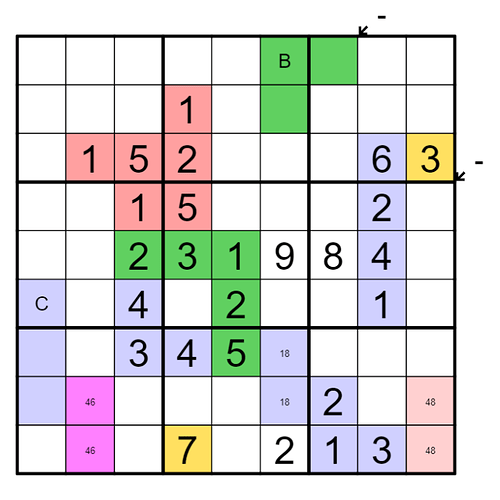 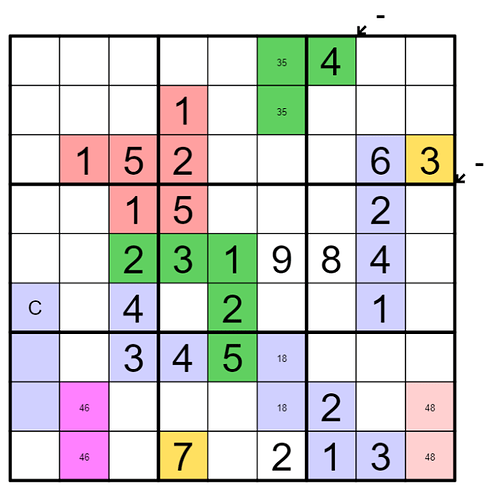 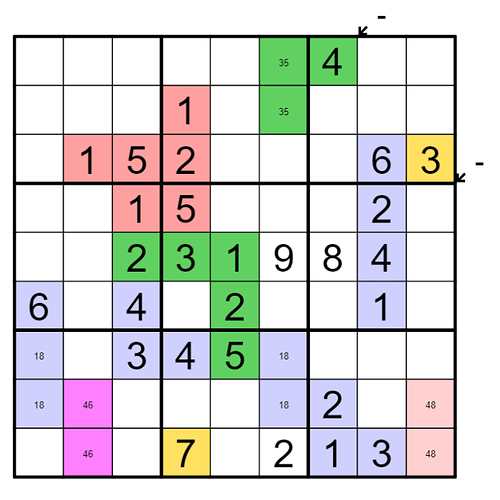 Uh-oh. We now have what’s called a “deadly pair” of 1s and 8s in Columns 1 and 6. In that configuration, there’s no way to resolve them with just the rules of sudoku. That must be what the egg diagonals are for!

Still, this does allow us to resolve the region in the bottom right. Whichever way the 1s and 8s are, there can’t be an 8 in row 8, column 9. That also allows us to fix the 4 and 6 region. 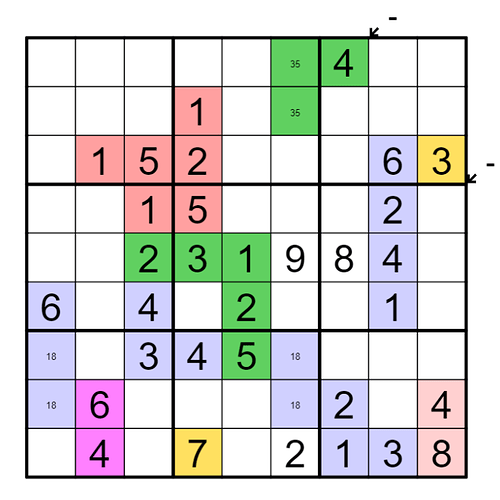 We now have the digits for all of the regions. That means it must just be sudoku left. Without too much difficulty we can almost finish the grid: 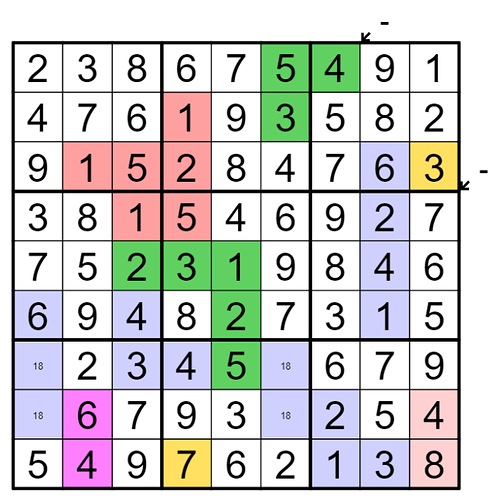 Adding the two marked diagonals gives us 31 and 24 with 1 or 8 to add to each to give the same total. That makes it easy to place the last 1s and 8s so both sum to 32. Sudoku complete! 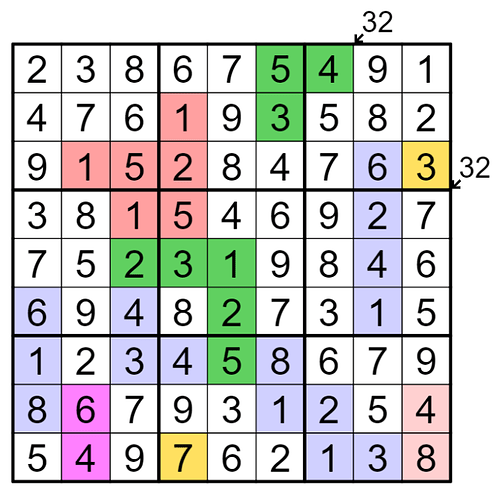 Now what? We’re told we need to take the top row and convert it to letters. That gives us the nine-character key BCHFGEDIA. But how do we use it?

We need to work out how the final instructions have been enciphered. The text says the name of the encryption scheme is included in the post five times. There’s no better way to get this that to scan the post for repeated words and places that sound odd. One thing you’ll hopefully notice is the phrase “bit more” appears in two places in two different meanings.

The five spots are:

We have the letters BITMOR and we’re told that the letters are in the right order once. A bit of Googling should bring you to the MORBIT cipher, a cipher based on Morse code which needs a nine-character long key. Which is exactly what we have.

Morbit is a bit fiddly to use, but luckily there are quite a few tools on the Internet.

Plugging the code and the key into that tool gives us:

If that was the date for me today, what country would I be in?

It seems hard to believe that a date can identify a location, but thinking back to our first thoughts there have been a lot of strange calendar shifts in history due to the Julian / Gregorian shift, revolutionary calendars, etc. And of course there are plenty of modern countries like Thailand which use a different calendar to the West. But let’s follow the instructions and see what we have!

Subtracting 0 from each square gives us: 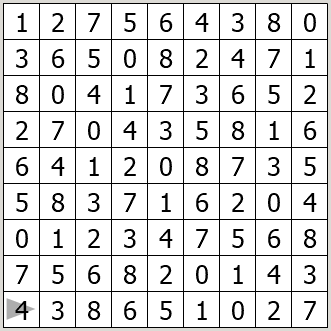 We’re told the date runs diagonally for 8 digits, so there aren’t many places we can look. Only one string seems like it could possibly be in DDMMYYYY format, and that’s 30021712, running from top left to bottom right: 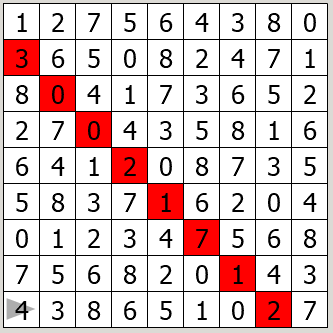 Unfortunately, that would be 30th February 1712. Even in leap years, February only has 29 days. But Googling that date shows that it did exist, in just one place: Sweden, which added the date due to a mixup with leap years when shifting between the Julian and Gregorian calendars.

So the answer is SWEDEN

You’re welcome. An earlier draft used an obscure Swedish version of Enigma, for thematic consistency, but it was hard to unambiguously clue all the input settings for the rotors.

You had a great time in the warm tail.