The puzzle has been solved! I hope you all enjoyed the journey! And congratulations to our winners!

(We’re still co-ordinating the Tweet winners. We had tens of thousands of entries, so please bear with us a little longer.)

We’re looking for a location. Several of you guessed that this would be on the moon, although this leap isn’t very helpful until the final step (as it were).

Still, there are a few intuitive confirmations for this. Along with the standard “to the moon” crypto meme, the Jungfrau slogan on the website, merch patches, and elsewhere is “One HOP closer to the moon”. There are also (very) loose hints in the final message: the final location is “breathtaking”, the character wonders “Where on earth” they are and then seems to have realization about that. Etc. Etc.

The diversion in the ninth HOP to Antarctica should also suggest that going far off the beaten track is permissible, and the rules make no specification that the co-ordinates need to be geographic co-ordinates, so we should feel happy that the moon is very much in play here.

But that’s hardly an answer! And besides, the rules do require co-ordinates, which means we want something very specific. So how do we proceed?

After going off-track in São Paulo (HOP 8), previous hops updated to provide more information. The story here references the character’s fuzzy memory, suggesting you should look back at previous entries.

Doing so, we find at each destination (except Zurich) a letter in the story has been changed to bold and italic. This italicization is further clued in HOP 8 as “something important has gone askew”.

The Seoul sudoku has also changed to the one below, which definitely isn’t a sudoku any more, and prominently features the flags of each hop in the story: 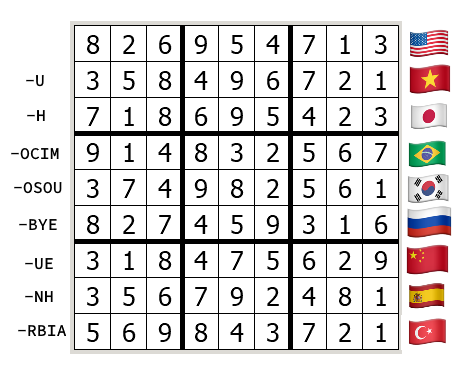 But what to do next? Just looking at the italicized letters doesn’t indicate much.

Each italicised letter comes at the start of a two-word phrase. Some of these (particularly “busily escape” in the Moscow hop) don’t really make much sense or add much to the context of the puzzles. So perhaps something is going on with the letters. But it can’t just be the letters indicated, or it would have been possible to pick less awkward phrases. So we must need the whole thing.

In story order, these were:

If it wasn’t already clear from the abundance of Us and Ps the kind of thing that was going on here, the sudoku provides an extra level of confirmation. Removing the indicated letters in order from each string by destination gives:

Unfortunately, ordering these by the nine-digit strings in the respective rows just gives:

Which… feels like a lot of work to get an answer we already had. Asclepius isn’t a place - He’s the god of health and was the answer to the Zurich puzzle.

[This step was also an oblique reference to how HOPR works: taking a lot of different data and transforming them to be indistinguishable in length and content is roughly analogous to the Sphinx packet format HOPR employs.]

But it indicates that these nine letters are important, and that nine-digit strings of non-repeating digits are also useful. But can we find another one? (At this point you could also just fire up some anagram software and skip to the end, but there is a way to be more precise.)

At several points in the story, the main character indicates feeling out of place. The final entry also explicitly talks about obscured metadata. The most obvious bit of “metadata” in the story is the geographic coordinates of each location. Visiting these locations reveals that they aren’t where each hop is supposed to be (again, except for Zurich, which is right). In fact, they’re directly North, South, East or West of the supposed location.

With a small amount of effort (because there’s no “definitive” coordinates for a city – I used latlong.net) , it should be possible to make a list of the differences, like so:

What should stand out is that the numbers 1-9 appear once each. We’re on the right track! Let’s line up the numbers and see what we get:

It’s not very famous, but Googling will reveal this is indeed a place on the moon! The fact that it translates as “lake of hope” and puns / words with the HOP string have been common for HOPR, should be the final confirmation for anyone still nervous.

The correct answer has to be in co-ordinate form, though, and the selenographic co-ordinates for Lacus Spei are 43.0 N, 65.0 E.

Soooo fun, please host more like this in the future!

When the winners of twitter challenge will be announced?

Tomorrow is the plan

Thanks! I hope I’ll be able to find an excuse to

It was a lot of fun trying to resolve it, brillant work setting this up! My friend and I almost did it, we just missed the final step, and got confused because the Chess board changed as well…:). Thanks a lot for the fun, the riddles, and congrats for the launch! Great community out there!

Uff that was harder than I expected

Damn it was a lot of fun. It is a pity that I did not have time to join all the quizzes and get the whole fun. Keep up the good work!

Wow, that is quite a puzzle! Thanks guys, it was fun!

Yes, this was a lot of fun, thank you guys for organizing all of that!