[The following is a draft proposal. Please discuss and provide feedback on this, along with suggestions for changes. The final version of the proposal will be presented for a vote on Friday July 8th.]

The DAO should move a total of $100,000 in liquidity from its HOPR-DAI pool on Uniswap on Ethereum to a HOPR-xDAI pool on Swapr on Gnosis Chain.

The Swapr team shared the following with regards to liquidity rewards:

"Currently 5% of our GC allocations are pointed to HOPR which is more than double our closest other partnership/relationship pair. We are adjusting our schedule to fit previous bonus allocations into our regular emissions - leaving a bit of room in our unallocated fund. At minimum, we can move this to 7% which represents 7840 SWPR/Epoch, or 15,680 SWPR/Month. Depending on discussions and where the DAO is looking to deploy liq, we would be happy to discuss further increased emissions - we have access to an additional 56000 SWPR/Epoch or 112000 SWPR/Month to be used throughout our various initiatives on each deployed chain. "

We’ve reached out to see under what circumstances those larger rewards would be available.

The current SWPR price can be seen here.

This is a fair offer and an amount to maintain close cooperation with the Swapr team and those who decide to continue participating in their stimulating farming. Let it be.

I think this amount is appropriate. Its smaller than the others and I think that is a good idea as Swapr is not yet incentivized as a token. It currently is a governance token, however governance is being run by dxdao. The plan for the future is to move governance over to Swapr token holders and to give control of the treasury which is currently in native tokens of each chain Swapr is on. They also plan to give a token fee share to Swapr holders. When this will happen and exactly how is not clear. So this is a riskier token proposition for value with Hopr however it also has alot of room for growth. When thinking of distribution of liquidity as investment this would be the riskier asset for rewards. I think this along with the other proposals should all be implemented together as a spread of risk and reward.

I bought hopr several times rencently on honeyswap. Everytime honeyswap found the best price from swapr. The fact is everytime I want to buy over 200DAI hopr, the price impact will be over 1%, whereas it’s already the deepest hopr pool on Gnosis chain. As a hopr early supporter, I already get used to honeyswap/Swapr and I just want better liquidity on Gnosis Chain.

I wasn’t the biggest fan of the carrot rewards for LPing - especially that you couldn’t claim them every day, but even had to wait once the round was finished. Nonetheless, I’m a huge fan of gnosis chain and it’s low fees, and I like the general SWPR perspective of becoming the main government token one day. Lot of room to grow as another staker already pointed out as well

I would go forward with this proposal.

Totally agree, I want much more liquidity on Gnosis than is currently available.

SWAPR has proven itself to be a solid DEX and it currently has the second highest TVL after Sushiswap. I support this proposal.

I really like SWAPR in part because their eco router can route through multiple other exchanges to provide the best rate. In the past I’ve seen this pull from DEXes including Baoswap, Honeyswap, and Levinswap. This would provide arbitrage opportunities and would increase the volume of these other DEXes as well.

I first discovered SWAPR because of the HOPR partnerships this year and it’s now my favorite Gnosis Chain exchange. These past partnerships make me even more confident that this would be a good place to provide liquidity. The current liquidity on their HOPR/DAI pair is $36,313.65 so I believe the $100,000 proposed is more than sufficient.

I also really like SWAPR, it’s one of my favorite exchanges. I know thats not an argument. Maybe it’s because the simplicity of the UI gives a feeling of trust.

Is there any knowledge/impression from the more literate about code quality, security, etc. of the different exchanges?

Same here. I made less 100dai swap on Swapr to keep a reasonable price impact. Not a good experience tbh.

Me too, I also got to know SWAPR because of HOPR and really like how it works (eco router and also their campaigns). It is good to know that SWAPR is the second highest TVL on GC after Sushiswap.

Considering the SWAPR’s proposal, it seems a reasonable idea to get further close partnership with them.

I am not at all an expert on this topic. But as HOPR is on Gnosis chain why not stay there and only make it possible for people to swap other tokens to DAI/HOPR so that this amount will grow in time. I really don’t like the Ethereum chain because of high fee (I know that it is low now but it will go up again; this my own opinion, no advice to buy or sell anything lol).

What I have written here

General remark/thought: what is the benefit of hypothetically implementing two several DEX pools on Gnosis chain? → the latter obviously assumes that at least the two most voted options by the DAO will be carried out by the team and that both are having a Gnosis focus. What is the reason? Dapp tribalism? Furthermore, this could lead to unneccessary liquidity fragmentation. That said, if such a proposal sees a positive vote, one DEX on Gnosis feels completely sufficient → let’s go with the o…

Furthermore: right now, there is already some liquidity on Gnosis - quite tiny, but sufficient for small amounts.
Adding 100K of liquidty as it is proposed here feels perfectly fine.

However, right now I don’t see much more benefit in this whole approach than to give the stakers the possibility to dump their claimed tokens directly on Gnosis with cheaper fees.

Maybe I am mistaken, but right now it doesn’t feel to me as if there would be a big community of gnosis native only waiting for such an implementation to go big in HOPR.

Furthermore, acquiring xDAI is still a pain for the average user.

To be honest, I thought the Swapr rewards have not been very attractive so far, especially compared to staking with a good amount of boosting in our own program. Once Uniswap deploys on Gnosis, they will take the largest share of the Dex market and this is also where HOPR should be with the DAOs liquidity.

@Uniswap
Just 3 months post launch, the Uniswap Protocol has nearly 50% market share on @0xPolygon. Bet your other favorite DEX couldn’t do that 👀 https://t.co/p2qrcvnid2 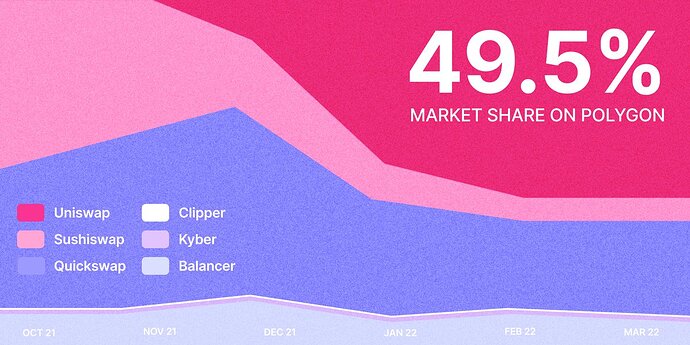 Furthermore, acquiring xDAI is still a pain for the average user.

On-Ramping xDAI from bank account via Bridge Wallet is easy with low-fees. So I don’t see this last argument.

Yes, the carrot rewards are unfortunately pretty confusing, and the projected APR figures are basically nonsense. I think they’re technically true, but they require so much else to go right (other participants staking exactly the right amount, market conditions staying perfectly stable) that in reality they’re quite misleading.

We fed this back to the SWAPR team and there’s active consideration about how to improve things. I don’t know if anyone listened to the recent HOPR Twitter Space, but the SWAPR team were very open and apologetic about the growing pains there.

And to be fair to SWAPR, APR projections at most DEXs are very dubious.

I am thinking of the average user using binance/kraken/kucoin as a starting point for their DeFi activities.

For sure. Carrot has a bunch of issues so I guess the question is does the swapr team plan to make this incentive of swapr tokens carrot dependent? Once again, appropriately this is the least amount of liquidity proposed but we should still make sure the percentages they proposed are not carrot dependent.