We’re celebrating the launch of the HOPR Farm with a weekend of contests and tech bounties. This is Day 4!

People seemed to enjoy the HOPRound the World forum puzzles from Jungfrau, but we couldn’t help but notice that most of them were solved in just a few minutes. So this time we’ve got something a bit more challenging. And of course there’s a prize. The first person to post the correct answer in this thread wins 1,000 HOPR tokens!

It’s Easter! (Unless you’re somewhere in the world that celebrates Easter on a different date.) What better time to relax with some films and enough chocolate eggs that you can seem them from orbit? Just try not to think too hard about how the date(s) for Easter(s) is (are) calculated!

To get you in the mood, here are four films with eggs in them: Yum!

Now that you’re worked up an appetite…

Complete the following sudoku that’s filled brim to base with eggstra rules: 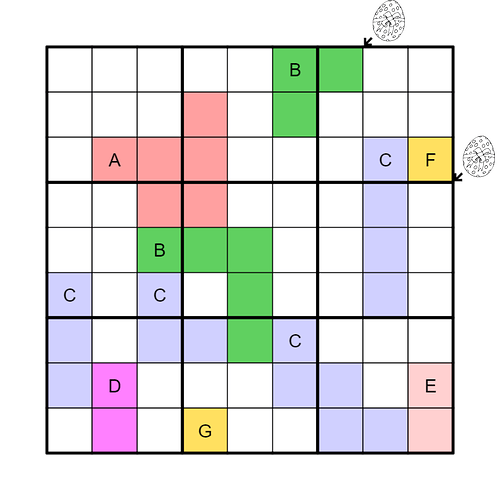 Normal sudoku rules apply (numbers 1-9 appear once in each row, column, and box). In addition, the numbers in the labelled regions must multiply to give the answers to the following questions. Numbers can repeat within regions (if this doesn’t break the rules of sudoku). Each region with the same label has the same multiplication total, but can contain the same or different digits.

A: The number of eggs the title character in Film 1 was dared to eat.

B: The current morning egg intake of the character pictured from Film 4.

C: The morning egg intake of the character pictured from Film 4 as a lad.

D: The difference between the release years of Film 1 and Film 4.

E: The difference between the release years of Film 3 and its gender-swapped reboot.

G: The number of sequels to Film 2 which have been released as of Easter 2021.

In addition, the release date of Film 3 can be found horizontally in the finished grid, reading in order from left to right.

Finally, there are two diagonals marked with eggs on the outer rim. Both diagonals sum to the same unknown total.

Did I say finally?

When you’re finished, convert the top row of the sudoku to letters, using 1=A, 2=B, etc. Use the resulting string to decode the following message:

The encryption scheme is not a common one, but the consecutive letters which make up its name method can be found five times in this post, jumbled four times and once in order, not counting spaces.

Good luck! Unless you think you’ve bit more egg than you can chew…

E: The difference between the release years of Film 3 and its gender-swapped reboot.

This cant be a two digit number right? @Matthew

The rules for all the labeled boxes is the same - multiply all the numbers inside to get the total. (Obviously for F and G that’s kind of irrelevant: there’s nothing to multiply together, so it’s just the number itself.)

A Letter represent a whole block and not a single box right?

Ah! Right, yes. Each letter is for the entire coloured block.

(I originally just had colours, but the software only has a strange selection, many of which look similar, so I added the letters as well.)

I’m in the middle of this puzzle. But I’m starting to wonder what should we count as Rocky sequels? All the movies in the franchise or only “Rocky“ +“ number”?

All moves in the franchise released as of today

My problem is, that I think I have all the correct answers for the film related questions, though I am also convinced that there is no solution to the Sudoku with those numbers.

Probably I am doing something wrong. :D

just discovered this riddle. Love it. Please do not provide any clues.