It’s a beautiful day by the riverbank. You realize you’ve been asleep. Opening your eyes, you see the red sphere of the observatory on the far bank.

You’re not quite sure how you got here, but you intend to relax while you can. The sky is clear, but something tells you a storm is brewing.

It feels like you were looking for something. Someone?

A wicker basket filled with half-eaten sandwiches and cakes sits untidily at your feet. You don’t remember eating any of it, but you aren’t hungry, so you suppose you must have.

You were definitely looking for something. Or was it running from something? In the long grass and still air it doesn’t seem to make much difference.

Suddenly, a large rabbit in a garish waistcoat bounds into view. It dimly occurs to you that this is unusual, but before you can work out why, the Rabbit approaches you with no small amount of irritation.

“You. You!” He looks at you imperiously over half-moon spectacles.

“Is something wrong?” you stammer. (Something is definitely wrong.)

“Nothing’s wrong! Nothing can go wrong! I just… seem to have lost track of time. I’m temporarily distemporized. What day is it?”

“Of course it’s Wednesday. Anyone with a nose can tell that!" he wrinkles his own by way of explanation. "I mean the date. The date! And the year, if it’s not beyond you.”

What IS the date? You fumble with your phone. There’s just enough time to see it’s September 1st, 2021 before the screen unceremoniously dies. The Rabbit has little sympathy for your battery woes.

Reaching into his waistcoat pocket, he removes a tightly wound scroll of parchment and begins to frantically scan through its contents.

With a flick of his quill, the rabbit scratches something onto the scroll, then furrows his brow.

With limited experience of agitated talking rabbits, you’re not sure what the appropriate etiquette for this situation is.

“I’m sure it’s fine,” you venture. "Have you perhaps made a mistake?”

“How could I? There’s just one rule to follow!”

The creature lets out an exasperated sign. Clearly such trifles are beneath him to explain.

“I’m in charge of keeping the Royal Records up to date. Times, places, royal decrees and… er… whims. They’re all here on this parchment.”

“That sounds rather complicated.”

“Not at all. It’s a perfectly simple system. Every minute, following the precise chronometrics of my pocket watch, I check the parchment and the time. If the time is on the parchment, I follow the instructions. If it isn’t, I don’t. That’s all there is to it. With just one rule, how could anything go wrong?”

“I suppose… but is it really a good idea to have all that important information in just one place?”

“Who wouldn’t want everything in the same place? It’s so much simpler.”

“I would never! Now where did I put my pocket watch?”

You’re startled by a sound from behind you, like the pathetic toot of the world’s saddest trumpet. On the far side of the river, the ball on the observatory shudders to the bottom of its pole. It must be noon. At least you can give the Rabbit a more precise time.

But when you turn back, the rabbit is gone – softly and suddenly vanished away. But he seems to have left his scroll, along with a torn and battered envelope.

Inside, you can just make out the message on a stained and faded sheet of paper:

You pick up the scroll. It’s just following one instruction at a time. How hard can it be?

What was the message the rabbit was trying to decipher? 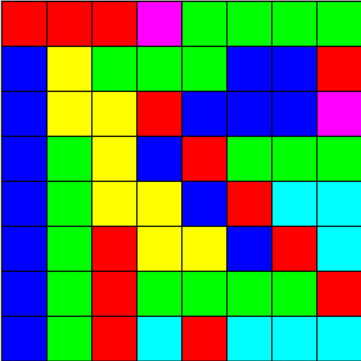 (Based on an idea from Travis H)