“The time has come,” the Walrus said,

"To talk of many things:

Of shoes — and ships — and sealing-wax —

You’re not sure how much time has passed. Looking around, the spire of the observatory is no longer visible. In fact, there’s no sign of the city at all, just verdant farmland as far as the eye can see. What there does seem to be is a short stout woman led on the ground, wailing uncontrollably and kicking her legs in the air like a toddler. From her elaborate dress and crown, you guess she’s whatever passes for royalty around here.

“Whatever is the matter?” you venture.

The woman glares at you with undisguised contempt, thrusting a crooked sceptre towards your face.

“Uh… whatever is the matter, your majesty?”

“My parade, of course! It’s ruined. And all because of HER.”

You glance around the field, but you’re definitely quite alone.

“Of course. Every week, the entire kingdom gathers for an enormous parade in honour of my birthday. We all line up, then parade around the kingdom, dancing and mingling until we reach the royal palace and spell out a wonderful message in my honour.”

“You have a birthday every week?”

“But then SHE went missing, and my subjects started disappearing too. She must have stolen them!”

Staring around, there’s no evidence of a kingdom, let alone a parade. But the mention of the missing woman stirs something in the foggy recesses of your brain. Before you can grasp it, the thought has vanished into the still summer air. (Was it still summer when you met the Rabbit? You can’t remember.)

“Why don’t you tell me what happened? I’m sure your subjects can’t have gone far.”

The queen sighs with unbridled contempt, but deigns to explain the situation.

“We began in standard formation before the parade, all fifteen of us as usual, including my two favourite clowns. My courtiers had generated the letters for a special birthday proclamation they said was sure to make me happy. This week it was: LIRFV EGUMB.”

“I’m not sure what that means.”

“Of course you don’t! If you could work out the message before the parade dance, it would spoil the surprise.”

“Then the parade dance began. But something wasn’t right. A few moves in my husband and I got separated. That’s normal for the dance, but…”

“I never saw him again! He just softly and suddenly vanished away. Then two rotations later something similar happened with another of my subjects.”

“How should I know? They all look the same to me. Whoever was directly in front of me in the parade at the time. One second he was there, then he suddenly ended up at the front of the parade line. We did one more move in the dance, and he vanished entirely. It’s HER! I know it is, she means to be queen.”

“We were halfway through the dance, but it was already clear that SHE was trying to spell out a totally different message and RUIN MY BIRTHDAY! And I don’t have another one for AGES!"

“What makes you think she wanted that?”

"Of course she did! The whole wretched word she was spelling describes exactly what she’s doing to my kingdom, and the last five letters are exactly the sort of thing one queen would do to destroy another one. Well I wouldn’t give her the satisfaction. I cancelled the whole parade and sent my remaining subjects on a hunt. I want her found, and I want her punished!”

You don’t want to encourage an obvious megalomaniac, however squat and shrimpy she might be, but something is telling you it’s essential that you also track down the missing woman.

“I’ll do what I can, but I’ll need some information about the parade.”

Without saying another word, the queen reaches into her gown and pulls out a list of parade protocols. Then she goes back to wailing and stomping her feet. Looking down the list, you try to puzzle out what’s going on. What B.S. system does this parade run on?

(When you’ve deciphered the original message and the supposed replacement message, head here to submit your answer.) 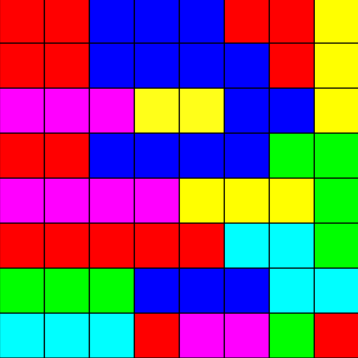