Some time ago I shared the concept of a browser-based private key used to quickly onboard a user. The idea was simple: create a dumb private key during the onboarding of a DApp so users wouldn’t need a web3 provider to start using the app right away. Using a Gas Relayer like OpenGSN anyone could use the app even if it had no gas. Here’s the overview (the initial link has a full breakdown). 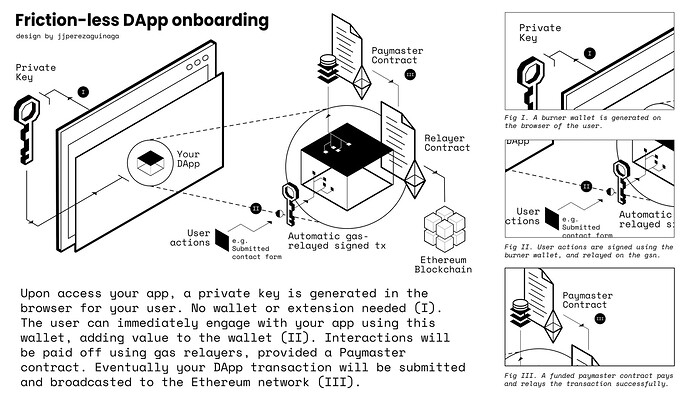 In a similar, a HOPR node generates a private key, but this has the following likely unwanted side effects:

What I am proposing is that we built a version of HOPR Node which is private key-less. To be more accurate, we would still need a private key, but this would be mostly used to sign off the transactions against a relayer which would be the actual individual paying the transaction. That way,

As a minor inconvenience, we would need to modify the HOPRChannels.sol smart contract so when payments are settled, we can pass to which address the HOPR tokens will be sent to. There are a few additional nuances, but in an ideal world, this would result in users being able to use their own MetaMask, which upon connection deploys a gas relayer any random key can use upon an adequate whitelisting process.

Thanks for the suggestion! Remember, if you’re finished and would like to make this an official proposal, please edit the title to include “[Proposal]”. It will then be flagged for moderation.

More information on the validity guidelines and submission process can be found here:

Here are some general guidelines for creating a valid proposal for this third DAO experiment. As a reminder, the topic is: What dApps, tools, and/or services would you like to see built on top of the HOPR protocol? Because this is such an open-ended question, it’s impossible to give precise validity requirements. But I can give some advice on what I’m looking for as a moderator. When you’re happy that your proposal meets these guidelines, adjust the title to include [Proposal] and it will be …

The discussion phase has begun! It runs from 2pm CET March 10th to 12pm CET on March 16th. The goal of the discussion phase is to produce proposals which address the current governance topic. This time round, the topic is: What dApps, tools, and/or services would you like to see built on top of the HOPR protocol? Proposals need to be assessed as valid in order to proceed to the referendum and vote phases. We’ll get deeper into validity further down this guide, but the most important test is t…

Upon thinking about the workload this would entail, particularly on the current state of affairs of the protocol, I’ll be dropping this one out.